Yet another amazing and useful plant of the Southwestern United States (as well as Central America, Europe, South Africa, New Zealand and Australia.). This plant has provided a main staple of food, medicine, textiles and other useful materials for the first people who have been inhabiting this arid land for thousands of years. In Tehuacan, Mexico, roasted agave remains have been found dating back more than 9,000 years.

It’s namesake, the Century Plant, comes from it’s  infrequent yet  showy blooming display that occurs only after 10 years of development in hot climates, and up to 60 years in cold climates. It shoots up this flowery plumage that can reach heights of 20-40 feet tall and oftentimes, the whole plant dies shortly after it’s blooming. These flowers are pollinated mostly by bats, moths and hummingbirds. There are over 200 different varieties of Agave.

Flower stalk and heart roasted, seeds ground into flour for bread or to thicken soups. Beer-like drink from sap, nectar as sweetener.

There are three major parts which are edible: Flowers, stalks or basal rosettes, and the sap. Leaves are a lesser edible part of the plant, yet during my treks through the land, many animals seem to munch happily on their spiny, succulent  leaves. The insides of the leaves smell like cucumbers, are quite sweet to taste, but stringy and rather spikey on the tongue when eaten raw.

During the summer agaves can produce several pounds of flowers each, which can be boiled or roasted. The stalks before they blossom in summer can also be roasted and taste like molasses. If you leave a depression in the bottom after taking the stalk it will fill with sap, which can be used to make tequila. The root is caustic, so you need to handle it carefully, but once cooked for a couple of days it’s sweet.  Flower nectar can be used to make sauces or sugar and bottled will last up to two years.

In the Tehuacan area of Mexico a traditional way to have agave flowers is boiled and then mix with scrambled eggs. The Indians of Oaxaca also use the outermost leaf layer to make a covering to preserve and protect food. 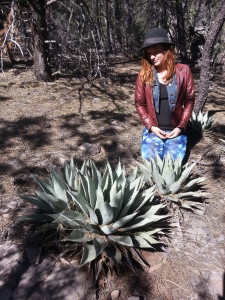 This medicinal herb is the source for hecogenin, a compound used in the production of many steroidal drugs.

The juice made from the agave plant contains estrogen-like isoflavonoid, alkaloids, coumarin and vitamins B1, B2, C, D and K, and provitamin A.

Agave americana has antiseptic, wound-healing and anti-inflammatory properties, which explain its uses externally as a medicinal herb to treat burns, bruises, minor cuts, injuries and skin irritation caused by insect bites. In Central America the juice from the agave plant has, for a long time, been used as a treatment for wounds. The Aztecs and Mayans used agave juice and egg whites to make a poultice that was then laid on wounds to speed healing.

A poultice made from the sap of root and the leaves is often used to treat toothache. The juice has antibacterial properties and can be used internally to control the growth of decay bacteria in the stomach and intestines.

Traditionally, it was used internally to treat ulcers, stomach inflammation,  IBS. Although agave seems like a laxative, the herb can also be used as a treatment for diarrhea and dysentery. Agave americana was used as an herbal remedy for weak digestion, intestinal gas and constipation.

Liver and other diseases-

tuberculosis, jaundice and other liver diseases, syphilis. Additionally it is used as a treatment for high fever by inducing sweat.

The juice made from the agave plant contains estrogen-like isoflavonoid. Plants esters found in Agave can be useful in treating female hormone imbalance that can cause various feminine issues and menstrual abnormalities.

Water in which agave fibre has been soaked for a day can be used as a scalp disinfectant and tonic in cases of falling hair.

***As always, this information is for educational purposes only. This information has not been approved by the FDA and is not intended to diagnose, treat, prevent or cure any illness. Do not attempt to use any plant that you are not completely familiar with. Always consult your doctor before trying any new treatments.***